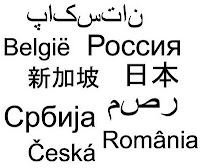 The IDN ccTLD Fast Track Process was approved by the ICANN Board at its annual meeting in Seoul, South Korea on 30 October 2009. First requests were received starting 16 November 2009. The process enables countries and territories to submit requests to ICANN for IDN ccTLDs, representing their respective country or territory names in scripts other than Latin.
Posted by Domains at 16:24